IPv4 Math is an application dedicated to IT experts. Not by chance I started to develop it when we had a lot of network planning requests. You know, whenever there's a need you must sharpen your wits. I seized the opportunity.

END_OF_DOCUMENT_TOKEN_TO_BE_REPLACED

Was it really needed?

Maybe not, I have to be honest. The store is full of applications that allow you to calculate subnets, manage IP addressing, etc. Just search for "IP" or "netmask" to get plenty of results! Initially I started using some of these available apps ​​but soon I realized that they weren't just what I wanted. It was not due to lack of functionalities: in fact, subnetting is quite straightforward, things to do in order to calculate a netmask are well known… the alchemy was missing, the way of presenting data, in a nutshell there was no satisfying GUI.

Appearance is often what matters.

I can seem a little bit crazy to you but the above statement fully reflected my thoughts!
Side note: since I didn't update this app after iOS 7 was released that assertion is not valid any more… no matters

Get inspired by something real

As a longtime Apple user I have always appreciated the attention to details: they employ an extreme minimalism that doesn't exclude, however, the touch of an artist, a small trick that transform it all, a sort of "magic"! For my project I got inspired by the standard calculator featured into every iPhone. In my opinion it is the extreme synthesis of the previous concept. Rumors tell us that it was the digital representation of the famous Braun ET66B. 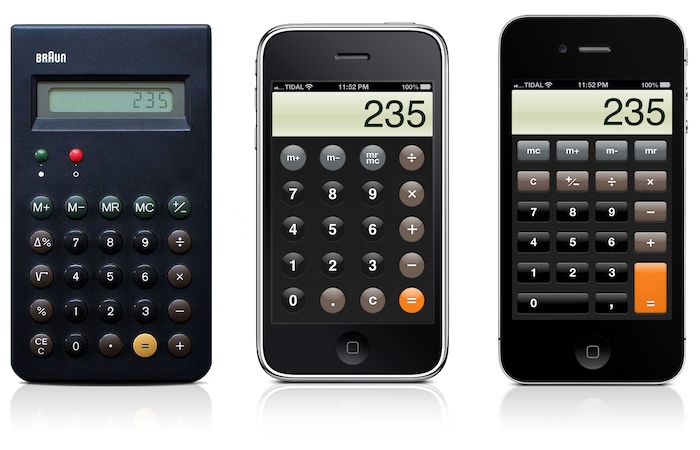 Its graphic was updated and revised over the years to better fit all the available space, buttons were extended and the common "square with rounded corners" paradigm was included as well. The GUI focuses on the keys that seem to arise from the body of the calculator, consistent colors were chosen and the detailed background makes it more real… It resembles the physical one, a sort of rough plastic.

After deciding the way to "present" data I started working on user interaction. One of the iPhone's strengths is certainly the ability to use gestures so I tried, where possible, to include them. The other element which I love is that you can use the device both in portrait or landscape so for the first time I introduced this feature in an app developed by me. 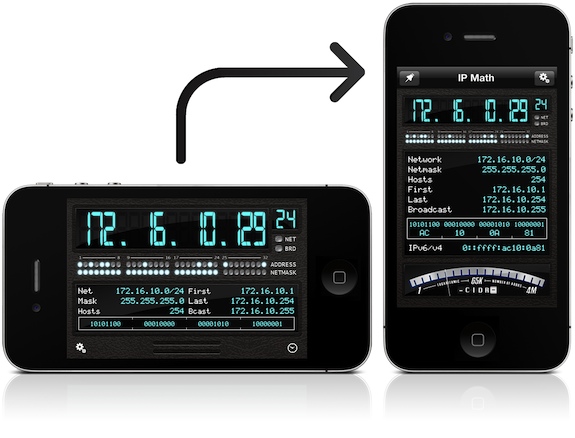 While switching from one orientation to the other I tried to rearrange the GUI in the best way, like the calculator app, I ensured that some details appear only when needed.

Finally, I addressed the "data input" problem. In all the other applications, when the user was asked to enter an IP address he had to deal with the standard keyboard. Since an IP address is almost a number more than a half of that keys was useless, there was a lot of wasted space!

One of the strengths of the virtual keyboards, over the physical ones, is that they can change and adapt. Why should I present standard keys?

Thinking at that question, I thought of what could be the best and more comfortable keyboard. Finally I decided that in addition to the numeric keypad and arrows it would be nice to have a slider to adjust netmasks alongside of a section where frequently used octets reside.

I loved the result and I think that it even convinced many other people: among the applications that I had published so far IPv4 Math was the one that had the highest downloads!