Dukto is a simple application that allows you to share files between devices connected to the same (wireless) LAN network. No more jump through hoops to transfer a file! It is designed to let you forget user permissions, passwords, transfer protocols, client, servers and, above all, it works between different platforms: Windows, Linux, Mac OS, Symbian, iOS, etc.

END_OF_DOCUMENT_TOKEN_TO_BE_REPLACED

Although I fully developed the iOS version and I contributed in some parts to the desktop product, its natural father is a friend and a colleague of mine: Emanuele. He implemented the first version that runs on all major operating systems and he has also released that code for free! To learn more, I invite you to read his blog:

END_OF_DOCUMENT_TOKEN_TO_BE_REPLACED

Here you'll find all the information and download links for each supported OS as well as any third-party porting to other platforms.

It all began back in 2009. When I was working with Vittorio and Emanuele we often need to edit the same files and, like we were in a joke, we each had a different operating system (i.e. Mac OS, Windows and Linux). The question therefore arose spontaneously:

How can we share files on the fly without having to get crazy?

Anyone who knows a little about PCs may be familiar with a lot of suitable programs. I may mention the classic "file sharing", more or less implemented in all operating systems, you could also use a chat file transfer and you can rely on versioning tools like the highlander svn. The problem, however, is that all this software is not intuitive! None of these solutions is snappy, cute and smart, there's always a problem and you always need to overcome some obstacles! In most cases, the best solution was only that good, old, dear USB dongle.

Since we are creative people we began to think that the right solution could be to directly connect PCs with a USB cable and make sure that everyone saw each other as an external drive… Oh, what good times! After these first imaginary solutions we got to the point:

Why should we use a flash drive when we are all connected to the same network? We just need something that reads data here and writes them down to the other side and we are done!

Hence the winning pitch… Everything we needed was just: a pipe! It sounds like a joke but it was the right solution. Everyone uses pipes to convey liquids, materials as well as electricity, vehicles and people!

Immediately, from our imagination, a vision came out: Super Mario! What we wanted was exactly a solid green pipe in which you could put files to have them delivered on the other side, just like in the well known platform game. This idea, though not literally taken, is what underlies Dukto. 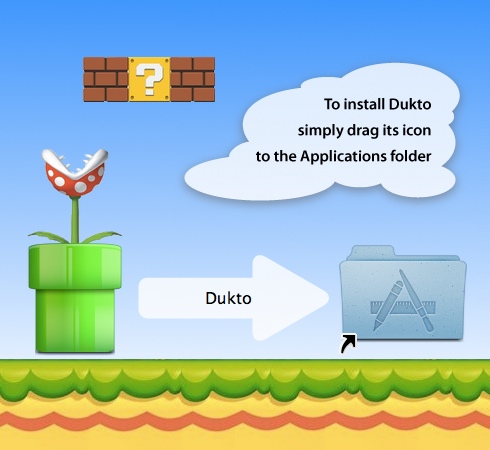 Even today, the program icon and some other (more or less) hidden parts recall that old-arcade-game idea.

Emanuele, who always cut to the chase, began to work on it immediately. In a while he had already written a big part of the program, I helped him with graphic design, icons and other frills and then all of us tested the results on the field. At the end only the name was missing! Initially we all thought that the right name was the Italian word for pipe: il Tubo, however, we soon realized that it was not enough international and above all that it was already used by other software… so I got the right clue:

Since our program let different systems to talk each other its natural counterpart is the Esperanto language!

We looked for the Esperanto translation of the word pipe and we liked the result! Since then, Dukto was the official project name.

Thanks to Emanuele's determination the final product was truly remarkable. It worked as expected, it was intuitive and it had all the required features! If my memory serves me right, when it was published online it became quite popular in different parts of the world! A day doesn't go by without us clicking on that little green icon on our desktops… and I hope that with my iOS version even more people will use it in their everyday life!